This year, the Horror Writers Association put on a new convention: StokerCon. It promised to be a great, new con with a ton of special guests and panels, as well as the Bram Stoker Awards.

And they decided to have it in Vegas, baby! 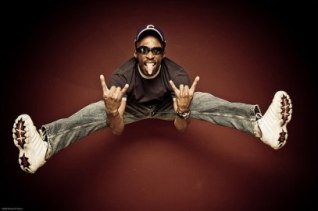 I am not one of those people.

At the thought of all the gambling, smoking, drinking, flashing lights, noise, ass cheeks, and excess, I felt more like this:

But I’d never been to that part of the country before, so I took it as an opportunity to see something new, if not partake in some of the greatest people-watching in the world.

And I was excited to go to the convention to talk about writing, sit in on some panels, and, above all, hang out with friends.

With respect to Vegas, I’d set some modest goals for myself:
1) See the fountains and glass ceiling at the Bellagio
2) See the gondolas at the Venetian
3) Maybe ride the roller coaster at New York, New York
4) Play a round or two of craps–one of my dad’s favorites–and see what the big deal is.
5) See some Elvises  (Elvi? Elvii?  Shit … they never went over how to pluralize Elvis at Boot Camp …).

Guess how many of those things I did? 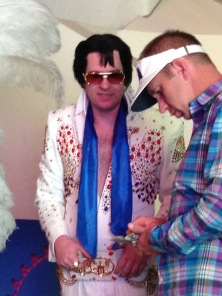 I saw this guy on the Strip.

I’m not gonna lie: when it was time to leave on Sunday, I felt kind of silly. I mean, I must be the least adventurous adventurer ever. Only I can travel 2,500 miles to a part of the country which I’ve never seen and still not see any of it.

But then I thought about all the great things I did do.

It was great that the very, first person I ran into was Chris Morey, the man behind Dark Regions Press. He was super awesome and friendly. He was also the guy organizing one of the two book signings I was doing that weekend.

This was for Madhouse. Beyond me are Megan Hart & Mercedes Murdock Yardley, both talented and fabulous ladies. Photo credit: John Palisano.

It was great to have jet lag (stay with me), because I was up and out at 7:30a (seriously, stay with me) with the full intention of exploring the Strip. Then serendipity intervened, and I bumped into Gene O’Neill, who was waiting on Scott Edelman to go to breakfast. Gene and I chatted for close to an hour, and after some Abbot&Costello-esque moments, we found Scott.
Then they invited me to go to breakfast with them, and I’m glad I accepted. Bearing witness to the friendship and camaraderie between these two was a lot of fun. Scott & I had never met before, and I found him to be wonderful company. Plus, any man who brings jelly beans to a book signing is okay by me. 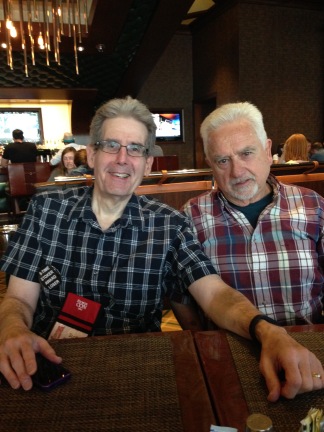 Scott & Gene. Such a pleasant way to spend my first morning in Vegas.

It was great to have extended conversations with Stephanie Wytovich, Kristin Dearborn, Rena Mason, and Erinn Kemper, four fun and talented women. We talked about writing and books and the con, and we shared many laughs.

It was great to meet RL Stine, to hear him interviewed by the awesome JG Faherty, to have him sign books for my kids, to tell him about the scary story workshop I did with my son’s class using lesson plans based on his books, to have him surprise the hell out of me with his terrific sense of humor. 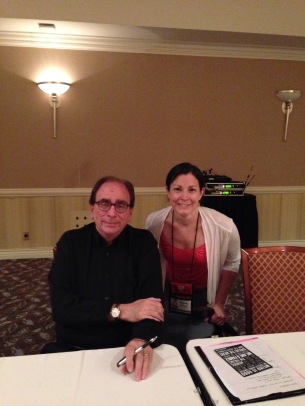 Although I should stop being surprised by that at this point: horror writers are some of the funniest people I’ve ever met.

It was great meeting Eric Miller—my editor for 18 Wheels of Horror—and learning he’s just as awesome in person as he is online.

It was great to get a sweet pep talk from John Palisano after a not-so-great pitch session. But it was also great to follow that up with a much better pitch session.

It was great being with F. Paul Wilson and Tom Monteleone.

It was great going to dinner with them and David Morrell. I’d never met David before, either. He was intelligent and kind, and also a great conversationalist. And we talked about everything from Calvinism to So I Married An Axe Murderer.

It was great spending time with one of my first writer friends, Michael Bailey, and his soon-to-be-wife Kelly. I had my first Irish Car Bomb with them, as well as Paul, Tom, and Erinn Kemper. Not to mention the soon-to-be-trademarked Soccer Mom Bomb. We also had a nice lunch with Tom, Erinn, and the always wonderful Jack Ketchum.

These two … so awesome.

It was great to watch Michael receive a Bram Stoker Award—the highest honor a horror writer can get—for all of the hard and beautiful work he did for his anthology, The Library of the Dead.

It was great to be sitting with two of his mentors, Tom & Paul. To see the pride on their faces when they realized three winners that night had gone through their Borderlands Boot Camp. I hope they feel good knowing they’ve played a role in the successes of those winners, as well as the successes of countless other writers, myself included.

So, yeah. I missed some shit in Vegas. The thing is, Vegas doesn’t care if I saw the water show at the Bellagio or lost a hundred bucks at the craps table. Vegas doesn’t care how many Elvises I saw. And Vegas will be there when I go back.

It was exactly what I had hoped it would be.

Plus, I got to see this guy: 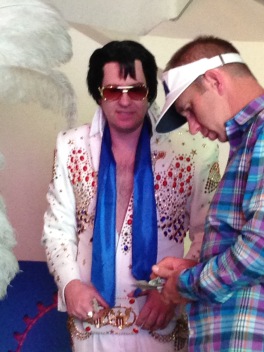